Home » our stories » SRK – 25 years of engineering innovation in Pietermaritzburg 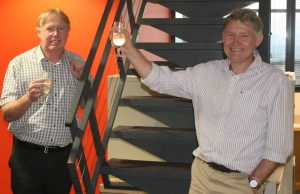 13 December 2018– Pietermaritzburg, South Africa: Starting small as a “one-man show” in 1993, the world-class Pietermaritzburg office of engineers and scientists SRK Consulting has served its region and beyond with projects as diverse as drought relief, water reticulation, stormwater infrastructure, tailings dams, waste management and cemetery planning and developments.

It was Rob McNeill – now a corporate consultant and principal geotechnical civil engineering technologist at SRK – who first manned the office to get the ball rolling in 1993, after Durban-based SRK director Mike Slabbert pushed to have a presence in the KwaZulu-Natal capital.

“Although Durban was the commercial hub, it was important to have a presence in Pietermaritzburg, as its status as capital meant that many organisations – who were clients or potential clients – had their regional headquarters there,” said McNeill.

With a decade of railway engineering experience in Zimbabwe, his time with SRK had been spent in Rustenburg and Welkom – working mainly on tailings dam design for mines as well as municipality work in fields like stormwater and road infrastructure.

“We already had some contacts in the Pietermaritzburg area, and began with designing road upgrades, water supply and stormwater systems for municipalities – as well as a project for Umgeni Water that included river boardwalks and a temporary dam at the agricultural showgrounds,” he said.

A breakthrough was not long in arriving – when SRK was awarded a large contract related to a drought relief operation in 1994; a regional council, together with a water board, required substantial geohydrological work including the drilling of boreholes in a number of areas.

“SRK’s profile rose on the strength of our work on contracts like these, and we were soon involved in large water reticulation projects – for instance, extending the formal water supply system into rural areas around Pietermaritzburg,” he said. “One of our most memorable achievements was a labour-intensive pipeline project – long before the Expanded Public Works Programmes.  About 90% of a 350 km pipeline was installed by hand – enabling as much project expenditure as possible to be pushed towards the communities where the services were being delivered.”

Demand for SRK’s skills were at a premium and Umgeni Water seconded McNeill as project manager for 18 months to augment the design work with hands-on construction.

The vagaries of weather swung from drought to floods, and a storm on Christmas Day in 1995 heralded a surge of work in another direction for SRK. McNeill had been talking for some time to municipalities about its capacity for stormwater solutions – and this now occupied the office’s focus for years to come. One of the largest projects was to map the entire stormwater system of the suburb of Edendale, following the demarcation process that incorporated Edendale into the Msunduzi Municipality.

“As the use of computers became more common-place, SRK was able to place a ‘stiffy disk’ detailing our capacity and expertise on the desks of most municipal waste manager in KZN,” said McNeill. “Based on the expertise we developed in this field, the Department of Agriculture appointed SRK to prepare guidelines for waste management plans for other municipalities in the province.”

“The process of identifying sites for graveyards was very similar to the process for landfill or solid waste sites,” he said. “SRK even prepared and conducted training courses for municipalities, to equip their staff to comply with regulatory requirements; we also produced guidelines – for use in municipalities – on behalf of the Town and Regional Planning Commission.”

This saw the office embracing a strong environmental focus, requiring the employment of scientists from environmental disciplines managing and conducting specialist studies and public presentations.

“In addition to doing physical design and project management work, we generated even more specialised, high-level services to guide action and compliance in line with new and unfamiliar regulations,” he said.

With ongoing civil engineering and environmental work for public and municipality projects – as well as for independent developers – SRK’s Pietermaritzburg office also leveraged its geotechnical capability into the mining industry. In KZN, it worked on tailings dams requirements for heavy minerals projects, and continues to do mining-related work in other parts of the country and outside the borders of South Africa.

“After a quarter century in business, we have certainly covered a lot of ground, and are proud to have contributed to the province’s development and infrastructure in such a variety of ways,” said Angus Bracken, SRK partner and principal engineering geologist – and current manager of the Pietermaritzburg office. “Our market-focused approach also ensured that the office evolved to provide solutions that were relevant to the time and place – building on our depth of expertise across disciplines.”